Howdy folks. Today we’re looking at an earphone that is beautiful to look at, is built to a very high standard, has an excellent cable and also just happens to sound awesome. Meet the TFZ Queen and read on to find out if this IEM can give your ears the royal treatment they deserve.

I’ve been a big fan of TFZ (The Fragrant Zither) ever since I reviewed their largely underappreciated (in my opinion) Balance 2M earphone back in November 2016. I was also pleased with their Exclusive King and Series 4 monitors but those didn’t quite tickle my fancy in the same way. The TFZ Queen is one that caters more to my personal preference subjectively and takes build quality to another level objectively.

“I frequently dream of having tea with the Queen.” HUGH GRANT

This sample was provided for the purpose of an honest review. All observations and opinions here are my own, based on my personal experience with the product. The TFZ Queen comes in the same style packaging that we saw with the Exclusive King and Series 4 IEMs. It begins with a simple, rectangular box with black print on the front. Since the very beginning, TFZ has been known for their striking designs and build quality. From their earliest releases up until their most recent, they’ve maintained a consistent style for all of their IEMs with the exception of the Balance 2M.

The TFZ Queen carries on that similar style of semi-custom shaped housings that follow the shape of the ear’s concha with the cable worn over the ears. Like the Series 2 and Series 4 models, the Queen has a single screw located at the lower, pointed section of the faceplate.

Speaking of the faceplates, that’s where the Queen stands out the most physically. On the surface is a textured pattern that kind of looks like waves on a body of water. It’s a subtle but striking design that, in my opinion, looks incredibly classy and premium.

The curves and contours of the CNC Aluminum alloy housings are very smooth and finished with a metallic matte finish. There is a small vent near the bass of the nozzle and another one on the forward edge of the housings.

Silver-coloured nozzles complete the earpieces and come with a solid lip to secure your eartips in place. There is also a perforated metal grill covering the nozzles to prevent ear wax and debris from infiltrating the shells. Another feature that is becoming a mainstay of TFZ monitors is the detachable cable. The one that comes with the Queen is a definite step up from their previous cables. It’s a braided 4-strand 5N OFC cable with a soft rubbery jacket.

Microphonics (cable noise) is practically non-existent and the cable itself is very supple with no kinks or memory. Ergonomically it’s absolutely brilliant and I hope they stick with this same style for their future releases.

At the top are the clear 0.78mm two-pin connectors, followed by pre-formed, heat shrink tubing. There’s a hard, rubberized, puck-shaped Y-split complete with the TFZ logo and solid strain relief at all points.

The now standard Velcro cable-tie is present here again and finally, the cable terminates in a straight, metal plug which also has a substantial strain relief. Overall it’s a great cable and has quickly become one of my favourites in this price range, despite not having a chin slider. The Queen’s earpieces are almost identical in size and shape to the Exclusive King so if those or the Series 4 gave you a good fit, these will too. But even if you haven’t tried any TFZ earphones before, I can tell you that this is a comfortable earphone. The smooth and rounded curves of the housings feel perfectly natural in your ears and even people with small ears should be fine.

Sound isolation is above average, thanks to the vents being on the inner side of the earpieces and the fact that the housings fill a good part of the outer ears. Noise leak is also minimal so the TFZ Queen should be suitable for just about any environment. 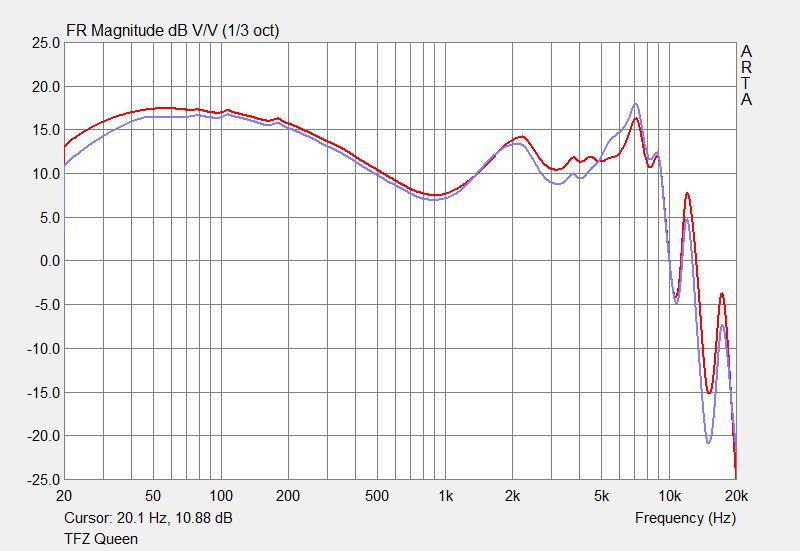 With the Queen, TFZ has finally steered away from the accentuated upper midrange that they’ve been favouring lately. Instead, you’ll find the Queen has an inviting warmth. The result of this tuning is slightly less clarity but also a sound that’s more musical and organic. There is a natural coherency to the Queen’s signature that I felt was lacking in the Exclusive King and Series 4.

The sound of the Queen is mildly V-shaped and carries the familiar TFZ “cleanliness” that I’ve come to expect from their monitors. Also, the Queen has the usual TFZ high sensitivity, meaning that it gets pretty loud and is easy to drive with any source.

The bass has a nice impact and is authoritative but still retains good control throughout. Bass notes have a slower decay that adds body and weight and contribute to the overall warmth of the sound. While not being as nimble and punchy as the Exclusive King, the Queen’s bass has good definition and a natural weightiness.

Sub-bass is powerful and provides a satisfying rumble when called upon, making it suitable for bass-dependant genres like hip-hop, EDM and dub etc. By no means it is restricted to those types of genres though; I enjoyed it no matter what I was listening to, from Daft Punk’s hard-hitting “Lose Yourself to Dance” to the acoustic-driven “Beautiful One” by Anneke Van Giersbergen.

The Queen’s midrange is smooth and brings with it a sense of warmth. Its full-bodied nature makes it great for male vocals, which it reproduces with a richness and fullness. But the inherent warmth and richness work well with female vocals too and here the Queen still manages to be clear and articulate.

Instruments are well-defined but still have good body and a smooth presentation. Resolution is reasonable and while it doesn’t reach the same levels of separation as the Exclusive King, there is a smoother quality to its tone.

The Queen’s treble is crisp and light and its extension contributes to balance the earphone’s warmth. Here the Queen plays it safe though, providing enough speed, airiness and articulation without ever becoming harsh or strident.

Detail retrieval is modest but respectable. The Queen doesn’t highlight every minute detail but instead presents things in a smooth and non-fatiguing fashion while still being forward enough to maintain its V-shaped signature.

The Queen creates a fairly decent stage, its note solidity pony’s up to portray a moderate but breathable space. Its separation is average, as is its depth, which contributes to passable but unexceptional layering, although positioning is still accurate. With the Queen, the stage never feels too confined or constricted but at the same time, it doesn’t feel expansive or vast. There are really a lot of similarities between these two IEMs, not only in sound but in their physical build as well. The Queen’s shells are just a shade smaller than the Exclusive King but are almost exactly the same shape. While the EK has a transparent shell and metal faceplate the Queen’s housings are entirely made of metal.

There is little difference in the bass but the Queen has just a little more body and weight, while the EK has more texture and faster decay. The Queen’s bass carries over more into the lower midrange, lending to a warmer and more full-bodied sound.

The core midrange is very similar on both but the EK’s more accentuated upper midrange make it a little edgier but at the same time grant it greater clarity. There’s more solidity and less airiness in the Queen’s treble, making it sound a bit denser and less expansive.

The TFZ Queen’s presentation is more vivid and dense. The 9T, on the other hand, is airier and more balanced. There’s a definite V-shape to the Queen’s signature, compared to the 9T’s more linear presentation.

The bass on the Queen is more pronounced and has more density, giving more bass impact than the 9T but at the same time, making the soundstage feel less expansive. While the Queen has an impressive sub-bass rumble, the 9T has better extension and a more natural resonance.

The midrange on the 9T is more forward because of its balanced nature, where on the Queen the heavier bass and livelier treble push the midrange back somewhat. Both earphones utilize a single dynamic driver but the 9T is more resolving and layered. Although the Queen has more treble presence, the 9T feels lighter and airier up top, giving it the edge in detail retrieval.

Where the Queen finds its biggest advantage here is in its more uniform shape and style. Many people are put off by the 9T’s unique design, which is largely why it never gained the hype it deserves.

The TFZ Queen is an IEM that brings back some warmth into the TFZ house sound. It’s a very capable IEM that can easily compete with other top models in this price segment. However, in terms of physical build and appearance, there are very few indeed that can match the Queen’s beauty. TFZ continues to evolve as a company and the Queen is another sterling addition to their already impressive portfolio.

You can buy the TFZ Queen on Penon Audio HERE.